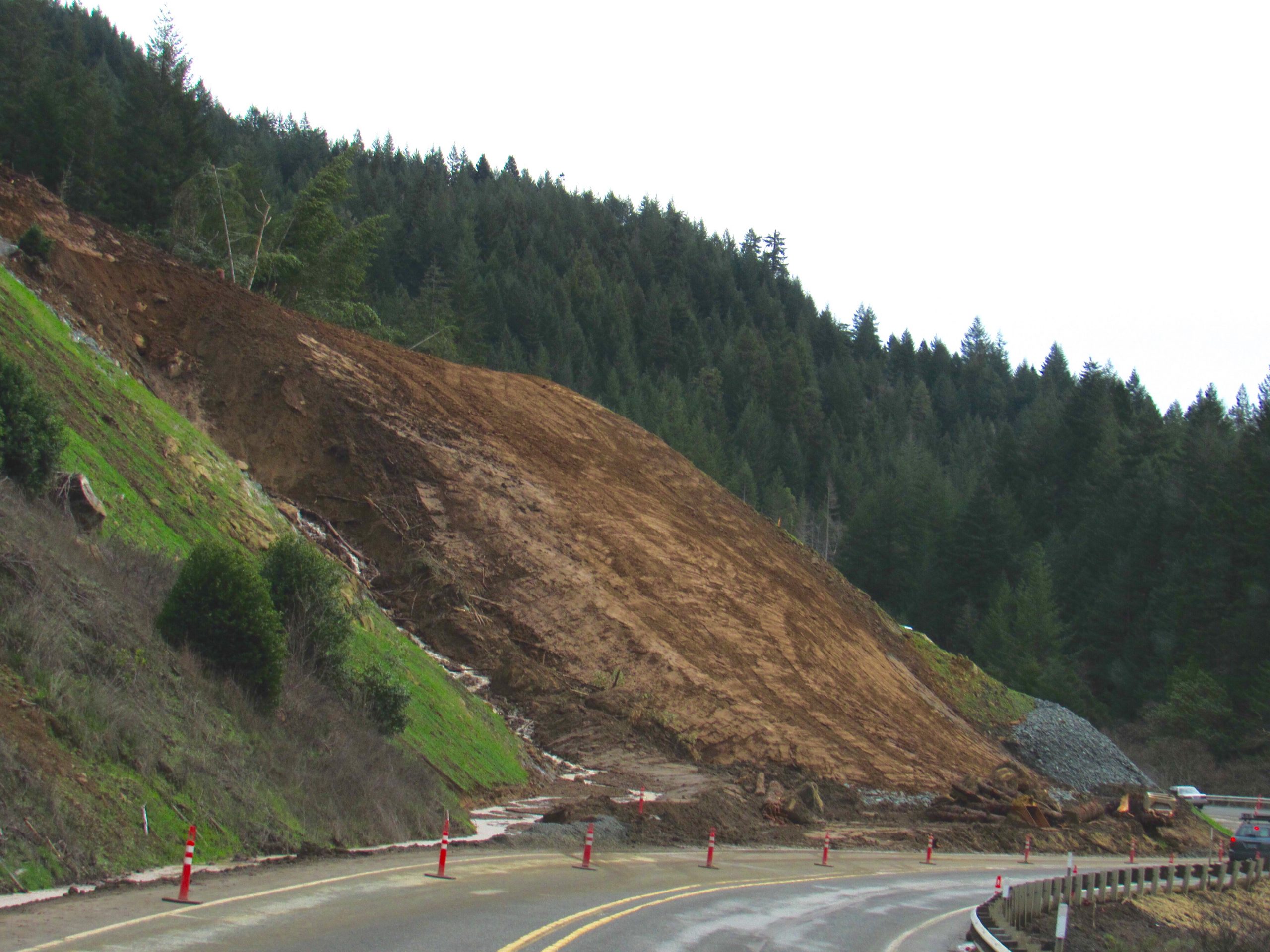 The Landslide Mitigation Project is a data-collection project implemented using remote-sensing technology in order to advise policymakers on how to reduce landslide risk in the township of North Huntingdon, Pennsylvania.

The project was founded by students enrolled in the Carnegie Mellon interdisciplinary Policy Innovation Lab class, focused on the theme of Smart Cities, where students from across different schools partnered with community stakeholders to solve problems in the public interest.

The Team and the Problem

Problem Identified: There is a lack of landslide-tracking infrastructure in use, as well as very minimal landslide mitigation plans.

Graduate students in Carnegie Mellon’s Policy Innovation Lab class, led by Professor Christopher Goranson, were encouraged to work with policymaking partners who came to the class with specific problems relating to improving the lives of people in their municipalities.

Students were asked to rank community partners and their respective issues that they would address at the beginning of the class, and teams were formed by pairing community partners with students who ranked them the highest, as well as by considering skill set compatibility needed to address the stakeholder’s problem. Thus, these four students were paired with a group from North Huntingdon Township, outside of Pittsburgh, to address the township’s concern regarding precipitation-induced landslide risk.

The Landslide Mitigation team consisted of graduate students studying public policy, data analytics, management, and business intelligence, which provided an interdisciplinary skill set for the team to leverage. Moreover, several of the team members were taking a geographic information system (GIS) mapping course at the time, which assisted team members in deciding to focus on remote-sensing technology as a potential solution to the growing landslide problem that North Huntingdon Township was facing.

Research Question Identified: How might we help create a data-collection plan that can be adopted by North Huntingdon Township to track high-risk landslide areas and mitigate the risk associated with landslides in the region?

The Landslide Mitigation team sought a holistic twofold approach to mitigating landslide risk: first, team members focused on recommendations for data collection, analysis, and sharing, and second, they highlighted policy interventions that would be effective in protecting people and assets from landslide damage.

For the data-based facet of the solution, they outlined a two-pronged approach of data collection and data sharing. To facilitate data collection, they suggested that North Huntingdon Township “leverage creative data collection opportunities, such as citizen crowdsourcing, or data mining with geological inspection.” Moreover, they suggested that the township take advantage of groundwork already completed by other groups involved in mapping, such as the Southwestern Pennsylvania Commission. Lastly, they suggested that the government pursue and publish harder-to-find data that would be extremely helpful in landslide tracking, through the use of remote sensing technologies such as SAR (synthetic aperture radar) or LiDAR (light detection and ranging).

In order to facilitate information dissemination of useful geographical data, the team suggested that the township adopt open data principles for data collection and partner with the Western Pennsylvania Regional Data Center to implement an open data hub. The hub would be an all-in-one open repository of North Huntingdon Township’s geological data that could be useful for landslide risk modeling. Then, the township could invite the public, researchers, and students to use the North Huntingdon Township data catalog, maintained within the open data hub, to find creative solutions.

This solution was inspired by the team’s discussions with Christoph Mertz, of RoadBotics, to tune their imaging algorithms to map tree lines and observe changes over time, as well as by NASA’s mainstreaming capabilities to produce hyper-detailed topographical change maps. 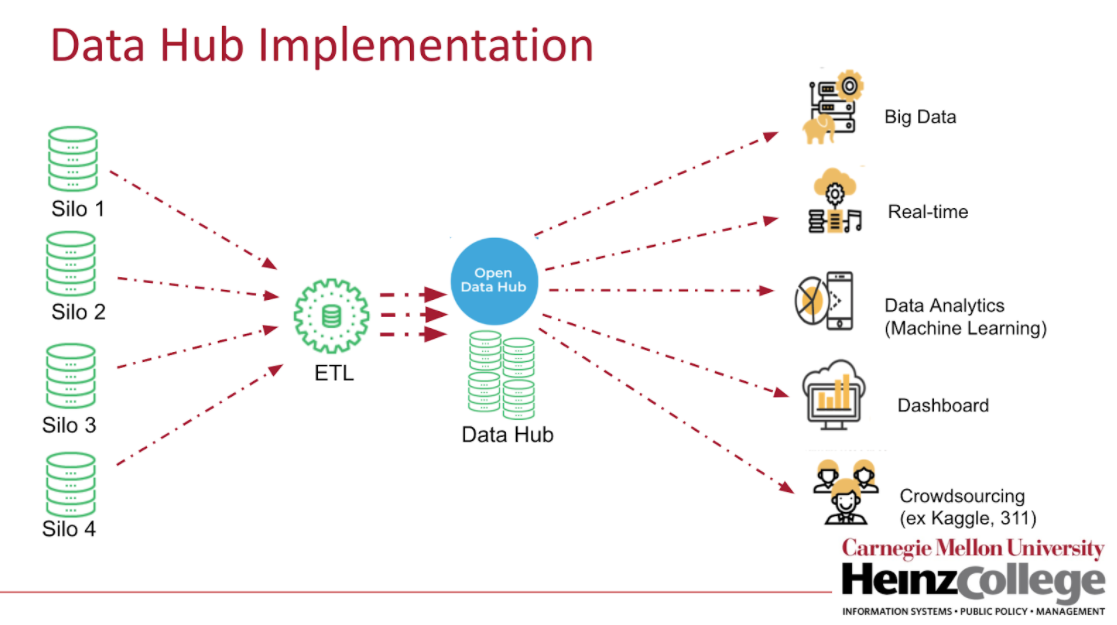 A diagram outlining how a data hub could collect information from different information silos and share it with future contributors that could develop innovations from this data.

The Landslide Mitigation team suggested three possible routes that North Huntingdon Township could pursue over the long term. These measures were preventive, focusing on delineating areas that are at considerably higher risk of landslides and limiting new construction in these high-risk areas.

First, the team recognized the importance of landslide risk modeling to find and categorize these high-risk areas so it suggested that the township develop a Standard of Service taxonomy that would assign maintenance interventions to each classification of landslide risk, based on the existing Allegheny County Landslide Portal Intervention Recommendations. The team also encouraged the township to increase site inspection standards to gather more precise data from engineering firms conducting site inspection prior to building on steep slopes; these suggestions include requiring minimum liability insurance and specifying an engineering firm portfolio or experience requirement for inspectors. These standards could then be documented and shared with a new coalition of townships working together in a newly formed  Landslide Advisory Group so that learnings and data could be shared, resources could be pooled, and duplicate work could be avoided.

Using the aforementioned data and taxonomies, the Landslide Mitigation team decided to focus on restricting construction-induced landslide risk. In particular, it suggested that the township develop more specific subdivision and land development ordinances targeting high-risk areas for landslides by categorizing slopes in terms of degree of severity (for example, moderately steep, very steep, and prohibitively steep) and limit the disturbance area for areas with steep slopes. In addition, to be mindful of long-term landslide risk prevention, it suggested development of a storm management plan to impose restrictions on building during high-precipitation periods and limit new building projects that would steepen existing slopes.

A mock-up of compliances for steeper slopes that could be outlined in more specific subdivision and land development ordinances.

Now that the project has been handed off to North Huntingdon County, the team compiled some insights for future students and teams working in a similar type of public interest technology development class.

1. Keep an open, shared stream of information with your community partner.

When meeting with new stakeholders and experts in the mapping technology field, the team took notes which were stored online in Google Docs that were also shared with North Huntingdon Township officials. As for final deliverables, the team “had transparency in sharing [information] … we packaged a few things in our specific folders and did a digital pass-off primarily through Google Drive and presented our findings to the decision-makers in North Huntingdon.”  Even beyond the deliverables, the team noted that the open stream of communication of new learnings was valuable because it allowed the community partner to understand where the team was during the idea development process and to provide feedback during the development of the final deliverable.

2. Focus on a solution that will be immediately valuable for your community partner despite having a personal affinity for a specific vision.

Landslide Mitigation team members discussed how they were focused “first and foremost on being committed to the feasibility and usability of what [they] created. After discussing possible pathways with stakeholders each week, they documented potential next steps and aimed to decide as a team what to do next to advance North Huntingdon’s goals. Sometimes that meant that the team “had to set aside any personal hierarchies we were creating and just really put the information that would answer each question best and be most useful for North Huntingdon.”

3. Aim to engage team members in a meaningful way despite differences between each member’s skill set, goals, and visions for the project.

Each member of the Landslide Mitigation team came from a different educational background with different personal learning goals. The team concluded that “being committed to the value proposition but not necessarily your own goals most of the time is crucial.” to provide value for the community partner, but that “trying to find time in that value creation to create value for you as a student is also critical.” The team aimed to do this by having open conversations at the end of each week regarding which tasks each team member wanted to tackle and delegating in a consensus-based fashion, while also respecting the overall goal of assisting North Huntingdon as effectively as possible.